Anyone else finding it difficult to get a cardio routine in? Sure, you can go to the track or the trail to get run or jog but there may be some extrinsic factors that make working out on the track or trail difficult. For instance, I have three kids of varying ages including an athletic preteen with a motor that doesn’t stop and a four-year-old that although rambunctious can’t keep up with her brother over a long distance. Throw in a seven-year-old whose movement patterns ebbs and flows from an all-out cheetah-like sprint to an almost sloth-like amble and it’s a recipe for disaster. Either I lose track of my son as he speeds down the trail by moving too slow or risk losing the short one to a family of ducks by moving too fast. One would say that there is an easy solution, just take to the track. I hate the track with a passion. In my mind, I feel all of the ground reaction forces when my foot strikes the concrete. My son laps me while I stick with my girls and the competitive nature kicks in and I try to catch him and once again the girls are behind me which unless the track is completely devoid of life I dare not do. That leaves me with having to do cardio at home but with every room in our townhome in use as an office, bedroom, or living area I have no place for a bike or treadmill. Besides, let’s be honest those things normally just become expensive hangers. How do you stay in shape with very little space while keeping family active? Shadowboxing, jumping rope and even stair climbing are great calorie burners that don’t require a lot of space and can be done almost anywhere. Training like a fighter can get you into great shape.

Shadowboxing is an excellent form of exercise. There are plenty of anecdotes of professional athletes, movie stars, and pro wrestlers that use a boxing routine to help get back in shape. Studies have varied but on average it looks like 300 calories or more can be burned in 30 minutes of shadowboxing. Throw in a bag or an opponent and those numbers can increase almost exponentially considering that boxers can lose more than 10 pounds in a 12 round fight. A simple shadow boxing program starts with throwing learning to properly throw jabs, crosses, hooks, and uppercuts while moving properly. When I’m in training I like to start by doing 5 3 minute rounds with only a minute of rest in between. This sounds easy but if I’m staying on my toes the entire time while keeping my arms and rotating my hips this becomes real work and has me dripping sweat. This routine can be done just inches from the corner as long as you have enough space between you and the wall you are ok. My kids and I are fans of martial arts movies and so we throw in kicks and other moves. We face off against each other and the play fight is joined.

Start in a boxer’s stance with your non-dominant hand in front, feet about shoulder-width apart and knees slightly flexed. In this position start with a slight bounce on your toes. I usually use a song with a real heavy and consistent baseline that I can keep up with the entire time. From there you start throwing, remembering to create almost a screw-like motion with your fist as you punch while rotating your hips to create power. Without the movement in the trunk and lower chain, you might as well just flail your arms about like a wildman. Now the real excitement comes in as you circle your imaginary/play opponent burning more calories and forcing your lungs to work even harder. An important thing to remember is to breathe properly. I tend to hold my breath and I fatigue quickly. That’s also how the music can come into play as you can sequence your breathing patterns with the music to create a more normal respiratory pattern. For this I’d suggest something more calming such as classical music. 3-5 days a week for 30 minutes or more provides a good boost to your cardiovascular system. Even if you have to start at 3-5 3 minute rounds your system will improve greatly. Another great cardio exercise that fighters use that doesn’t take up a lot of space is skipping rope.

Everyone has watched those training montages in Rocky and Vision Quest where the protagonist is by himself in a small room jumping rope to a rock song from the ’80s or ’70s. There’s a reason that Rocky and Loudon are skipping rope. It’s a great cardiovascular exercise and also works on foot speed and coordination. It involves multiple muscle groups which means there is a higher caloric expenditure. It has been suggested that a total of 70+ calories are burned in just 10 minutes. There’s also less ground reaction forces when your foot hits compared to running so if your body is not able to yet attenuate those forces on the track skipping rope is a good alternative. At my heaviest of 285 running was almost out the question because it hurt so much. I was able to substitute jumping rope and was able to lose some weight which helped decrease the pain I felt while running.

Jumping rope does require more space than shadow boxing but it doesn’t require a significant amount. I usually can skip rope in the hallway of our home or step outside our front door and do it in the driveway or the porch. It’s also another exercise that doesn’t require equipment. Not everyone is good at jumping rope and can easily spend most of their time untangling themselves from the rope. Well, an easy solution for this is to just do the same motion without the rope. It’s the same mechanics with your feet leaving the ground and still rotating your wrist so you are still using the same muscles meaning calories are still being burned it just doesn’t look as cool. Also jumping rope can be done with the family. If the family is highly competitive put a timer on and see who can last the longest. Or the family can play some of the games that were popular back in your wonder years such as double dutch and watch your Fitbit go crazy. Another simple way to get that activity tracker working overtime is to hit the stairs. 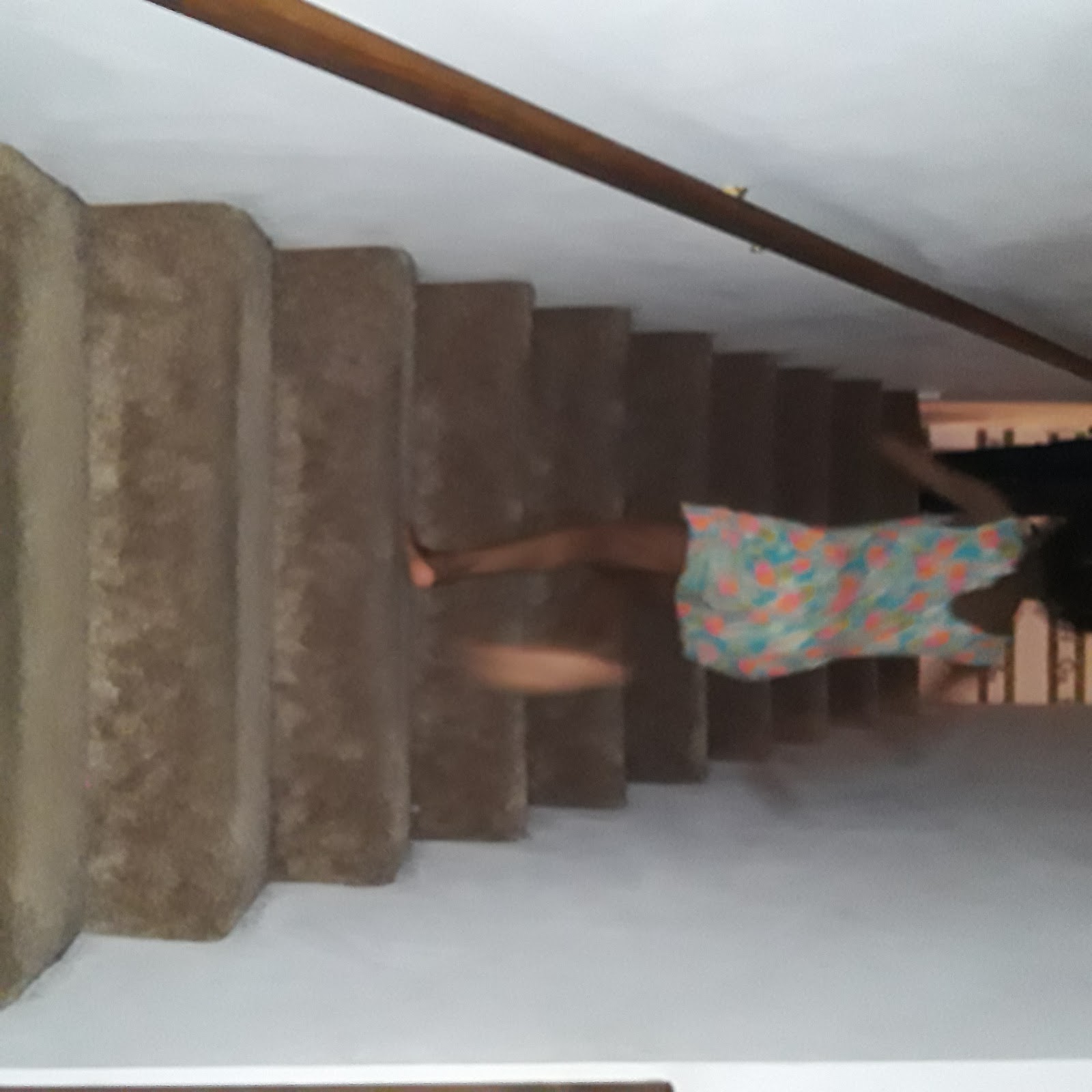 “Bleachers” is one of the most feared commands ever uttered by a coach. After about 2 times ascending the stairs, your body starts to feel it. 5 to 10 times up and yes there’s a burn. 20 times or more and you start to become religious praying that your destination is on the varying next floor. In PT school our anatomy lab was on the 10th floor. To progress to the next floor you had to go up 2 flights of about 12 steps each. 240 steps in the hot summer carrying a bookbag weighing about 40 pounds. The numbers of students taking the steps dwindled by the day and those that did continue taking the steps made sure they had an extra water bottle to replenish themselves after we finished climbing our Mt. Everest. The

numbers vary for how many calories are burned while climbing stairs but I know on a stair machine I can easily burn more than 300 calories while moving at a pace that only causes me to breath slightly labored in under 30 minutes so if I keep that same pace while climbing the stairs at home for the same amount of time I’m in business. That’s just going up. Less calories are burned going down but calories are still burned increasing the thermogenic effect.

My kids when bored have made it into a game. They do a relay race up and down the stairs with each one having a go. They do a few rounds trying to beat their previous time each round forcing them to move faster. Even without a flight of steps, this activity can be done on the porch steps over even a stepping routine on the curb.

Aerobic activity is defined as an activity that is done over some time at a moderate intensity. Running is a great aerobic activity but for a variety of reasons may not always be possible. These activities can be done in a small space without having to leave your home yet still get your heart rate going. For my family, these are some of the best cardio activities because they take up little space and we have fun doing them. Many other types of aerobic activity can be done in close quarters but the best one is the one that will keep you interested consistently and so that you stay active.

To find a Physical Therapy clinic in your area that meets your needs use the BetterPT physical therapy clinic locator at http://www.betterpt.com. This will put you in touch with a P.T. clinic that can help you address and achieve your goals. There is also a BetterPT app that you can download on your phone.

Dr. Marquis Jordan decided to become a physical therapist after his grandmother lost the use of her legs when he was a pre-teen. He grew up playing sports in his youth such as basketball and football but the first time he stepped foot in the wrestling room a passion was ignited. As a former wrestler, he knows the effect injuries and pain can have on someone’s psyche. He is a graduate of the Medical College of Virginia and has participated in numerous sports symposiums and a year-long manual therapy residency. He has worked with injury clinics for athletes and has even worked with professional athletes and injured members of the U.S. military. His interests lie in grappling and other martial arts, soccer, and basketball. His interest in the recovery of injured athletes has peaked with the participation of his kids in these sports. In his spare time, he enjoys reading and spending time with his family.